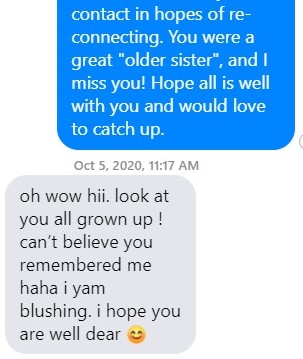 Reconnecting With a Friend and Cold Messaging on Facebook

Hello, my stylish friends! The other day, I stumbled across old pictures from August 2013: the first time I returned to South Korea with other Korean adoptees and our families. Time flies, to say the least! Years later, I still retain vivid memories of my lifelong friends, one of whom I felt proud to call my 언니, or “unni” (older sister), at the time. Out of the entire group, five members (including myself) were middle-school-aged, in which this older sister guided us throughout our trip to our motherland.

As someone with younger brothers, I understood what it felt like to take more responsibility at times. However, never having an older sister myself, I deeply admired my unni. She neither shied away from showing her true colors nor telling people straight-up how she felt. I tried to mimic her confidence and wit, though I felt quite awkward and insecure while doing so. Looking back, some of our conversations opened my perspective to realities that, at the time, I barely understood as a naive pre-teenager. Trying to see the world through her point of view, I suddenly wanted to rush my childhood and grow up.

I last saw her at the hotel in Seoul right before we departed for the airport. She never said a formal goodbye—only (apparently) rejoined us at the airport for returning to the United States. At 12-years-old, I didn’t piece everything together (and still don’t know to this day) as to why she separated herself from the group at the end of the trip. I desperately wanted to keep in touch with her. However, even at 12-years-old, I knew that the chances were slim and that we would likely never cross paths again.

Fast forward to October 2020, I was looking through old Korea photos. I then reached out to my 오빠 “oppa” older brother from the trip, and he circled back her Facebook profile. Cold messaging her, I remember the excitement I felt when seeing that she accepted my friend request and responded.

I see little communication between the two of us in the foreseeable future but feel at peace from reconnecting with one of my first unnis/role models/older sisters.